Goodbye to the Cotswolds in March… 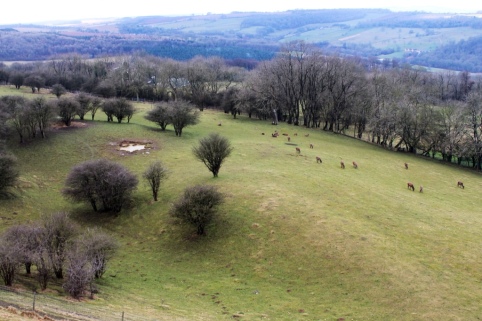 Hello to April in Ottawa:

Just a two weeks later, the Rideau Canal is filled again and the old elm sees its reflection:

Friends return – the Scilla is among the first. Scilla will print blue, like bluebells or hyacinths. 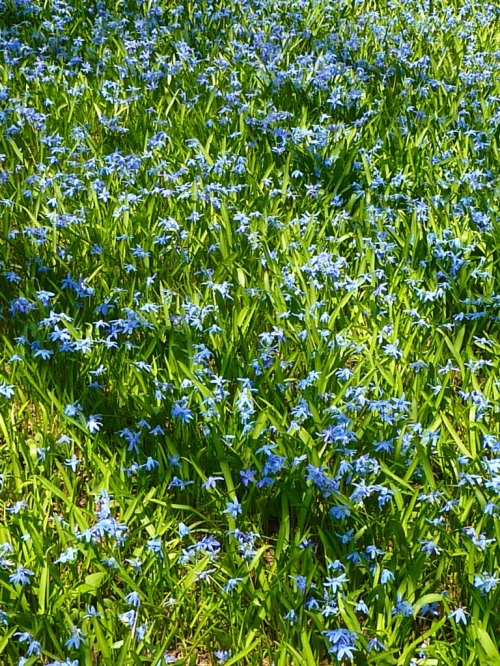 The spring garden is slow this year, five weeks later than in 2012. Iris, perennial géranium and tulips are growing well – all of them ready to give colour in the dye pot.(The iron sculptures are by my husband- he calls them “Peony” . This year, I will wrap them with cloth and plants to make a print. ..See the toad on guard, too, on his plastic perch with a rock from Wharfdale)

Some old friends did not make it. Two mature blue Italian plum trees got too much Black Knot and we had to cut them down. We were sad. This is what they looked like afterwards, waiting for the first outdoor dye session: 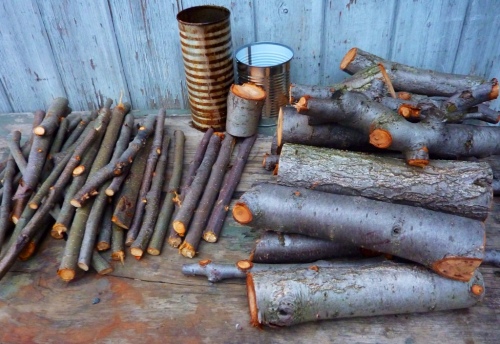 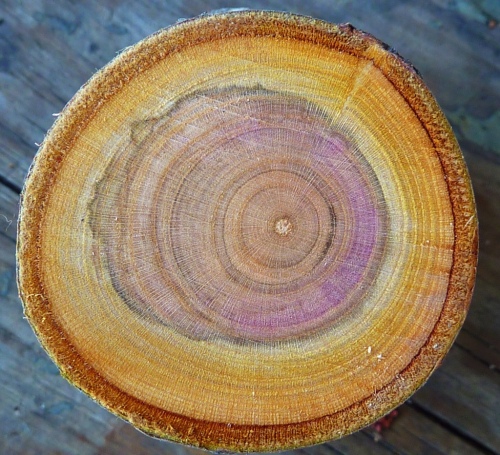 Amazing colours! Bark and wood dyes this spring, clearly. And prunings from the Concord grape.

Rhubarb leaves are a traditional mordant for cellulose fibres but are poisonous (oxalic acid). I prefer sumac – it is plentiful, easy to use, and a native plant besides. Using native plants is one of my aims in dyeing.

Alpine Strawberry is good as ground cover – it selfseeds, too. It makes a lovely clear print.

Perennial geranium, oh so dependable in the eco print bundle. I dug some up out of the snow in January and it was still green – and it printed greeny-yellow, like …

The Tulipa Tarda was tardy indeed this year. I will not print it- too lovely to pick and too few in my garden. 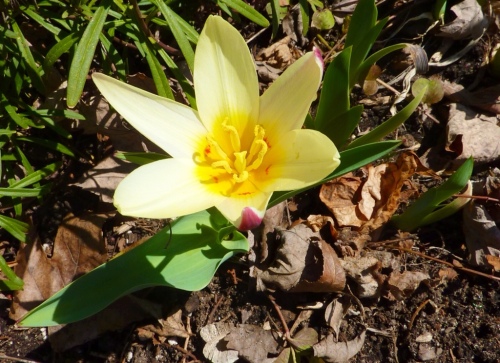 The crocus prints beautifully, petal, stamen and leaf. Plenty of those!

But I have to wait some weeks longer for other plants to print…the trusty Bergenia is up but not much else on the long border beside the canal pond. 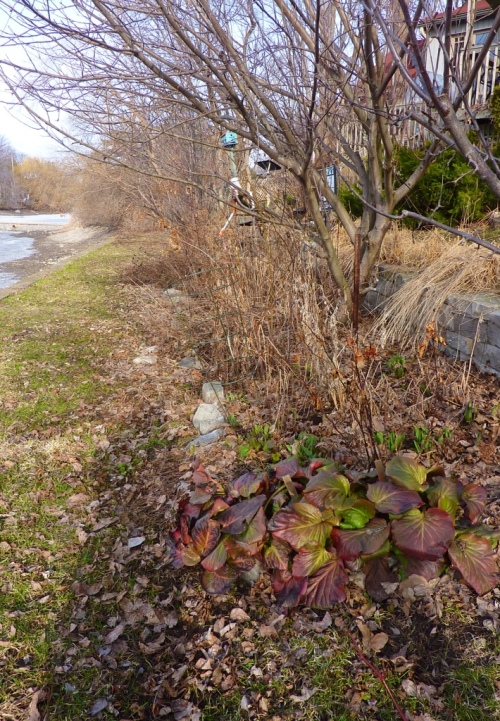 Buds, branches, barks, catkins. This late spring is giving me many of these to print while waiting for leaves and blossoms. But it is spring nevertheless and the robin is back in the dye garden.

While waiting for the garden to provide, I forage in the kitchen. These accordions were printed with black tea and bits of iron on 140 lb. water colour paper, Saint Armand “Canal” paper (somewhere between 140 and 80 lb. in the weight) and 80 lb drawing paper. The papers were steamed after soaking briefly in alum acetate mordant. 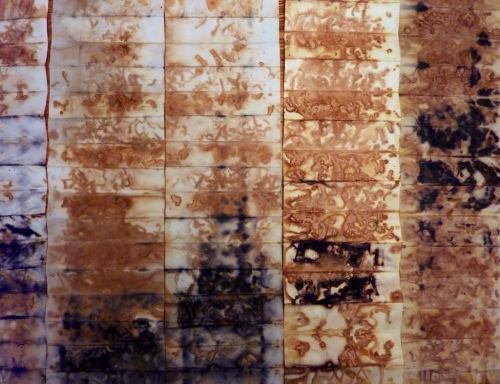 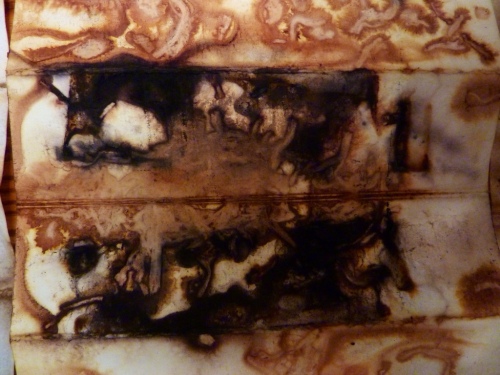 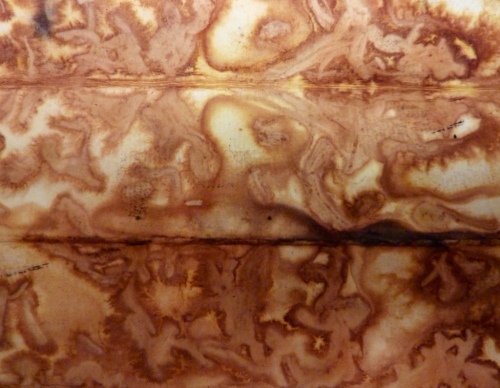 An ancient yew avenue in a church yard in Painswick, Gloucestershire 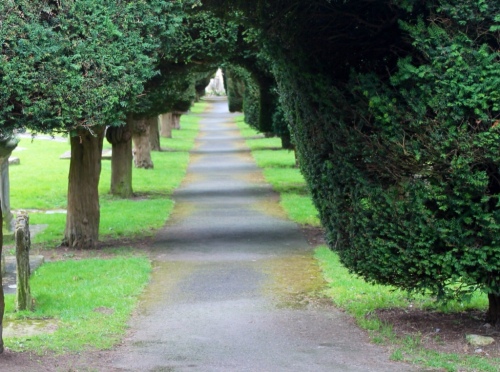 Tiny daffodils in a stone planter. The streets through the village are so narrow that the front gardens can only be made in wee pots on the front steps of a house or on the sidewalks. 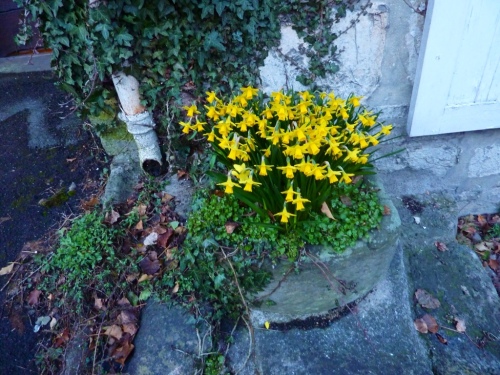 Tabitha's Well in Painswick. The Celandine grows abundantly there. The water runs down a steep hill to a river where the woollen mills used to be.

“Chuppah” means “that which covers or floats above ” ( cf. The New Jewish Wedding, Anita Diamant)

Silk organza and silk chiffon float nicely but they are not so easy to sew. Boy, do they slip and slide and stretch… and float away from your fingers. I cast my mind back to Needlework class at High School in England and to Sister Mary Joseph, our Needlework teacher, and all my wonky lapped, French and Run – and – Fell seams. Sigh. Indeed lovely. But time consuming. Could there be a less ” Slow Cloth” solution?

I tried a “short cut” to a faster cloth. What if I laid the textiles out on the wood floor, stuck it down with low tack tape and used the straight joints between the wood boards to true the fabric and to align the seams? 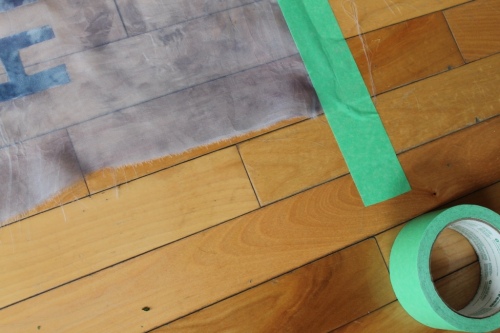 Not every “What If” works. All I got from this one was more wonky seams, just as in Needlework class. Several hours, some Avoidance Activity ( will report later on this) and much really picky seam unpicking later..

I was ready to heed Sister Mary Joseph’s advice: “Tack them in place first! “

It took me quite some time to baste four 72″ lapped seams but this is Slow Cloth and it was worth it. I even enjoyed it. The eucalyptus print panels were lapped to the Red Cabbage print overhead canopy after seam edges were zigzagged to reduce fraying/ and straight stitched for easy folding; then the seams were machine stitched flat. (I think the US for Sister Mary Joseph’s term is to “flat fell” a seam)

Next was the applique of motifs on the canopy. I had some misfortunes with the lettering on the canopy roof. For the English verse “His /Her Banner Over Me Is Love” I used very old fusible and so the letters peeled off after a few days…another lesson learned. For the replacement letters, figleaf motifs, Hebrew letters, Mogen David and Olive Branch appliques, I switched to new Steam A Seam Light. It took a couple of extra days to re-do the lettering but the results were satisfying.

An Olive Branch entwines the letters on the canopy: 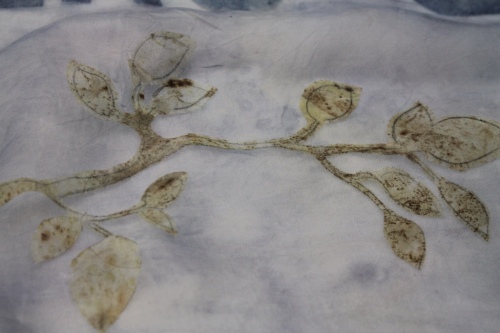 Fig leaf motifs in five layers of silk organza for the four corners of the chuppah, strong enough to support the poles and the canopy: 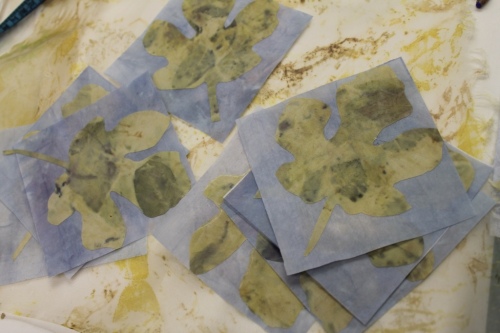 With a soldering iron, I burned holes in the fig leaf motifs for the screws on the finials to pass through, then fused the fig leaf “patches” to the corners of the chuppah. 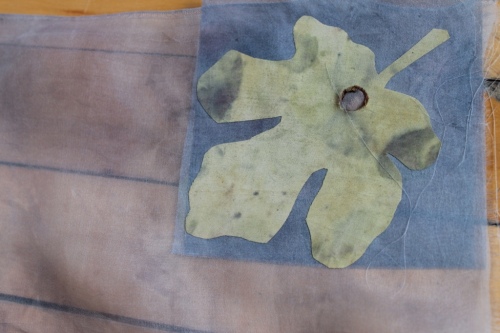 The finial in place. We found the poles and finial on sale in the drapery department at a local fabric store

This house plant provided the template for the figleaf. Can you see a fig?

Remember the recent Red Cabbage experiments? These lovely blues and turquoises are now part of the chuppah. 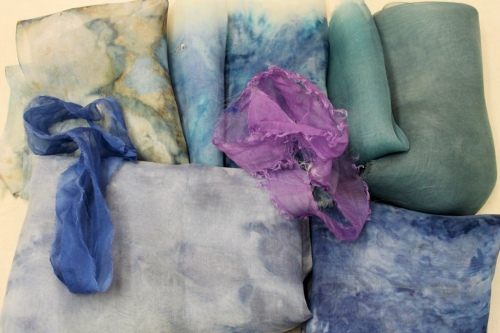 All of these printed textile fragments are to be incorporated into the final phase of the chuppah construction as long ribbons or fringes attached to the poles at the corners. The ribbons go in groups of eight on each of the four poles to signify fringes, as on a prayer shawl.

Here are some of the ribbons in progress. The Red Cabbage blues are combined with fragments of other eco printed textiles in co-ordinating colours. The yellow silk is Golden Rod, the dark one is tea and rust printed, the light is a eucalyptus print, the blues are Red Cabbge.

The edges of the chiffon and organza ribbons need restraint and a narrow zigzag does a pretty job of edging. For readers cringing at the very thought of how long it might take to zigzag around 32 ribbons, 72″ long:

SURSUM CORDA! Lift up your hearts!

It took me ten minutes to make one ribbon after cutting it out: so six minutes to sew one ribbon, two more minutes to iron it and another two minutes to trim off the “beards” with my trusty little Fiskars snips. Add five minutes as guesstimate for cutting, so fifteen minutes per ribbon times thirty- two.

Thus, four hours to make the ribbons ONCE the printing is done…and the amount of time for eco printing is another story…Slow Cloth indeed. 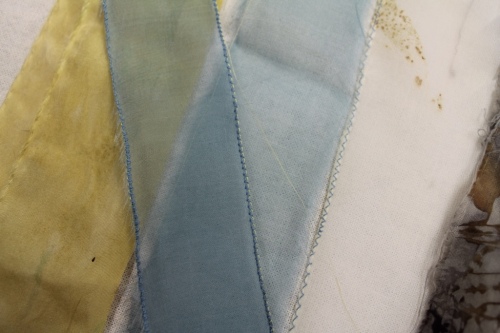 Finally, here is a pic of part of the chuppah in progress with lettering and leaf motifs in place. The blue of the sky today (it was a ridiculous 80 degrees F here in Ottawa!! ) and the blue of the silk roof of the canopy look almost the same. That was the idea- for the Bride and Groom to look above their heads, for the canopy to disappear almost against the sky and see only blessings on their wedding day.

Last pics of the chuppah before the wedding will be to show the ribbons all done and the 16 small “buntings” or “prayer flags” in place. After the wedding (first weekend of May) I will post pics of the finished textile.

Ink play by a visitor to the West End Studio Tour, first weekend. I am happy to report that the artist returned (with a friend) to pick up more inks! So I was able to give her her work from the weekend before @westendstudiotour
Fungus in my driveway: any idea what it is? I have never seen it here (or anywhere) before. Will it make colour, think-you?
Hello bee lovers. Question for you. This bee has been hiding, scarcely moving since Sunday, under the marigold. Today it is moving around again, collecting. It has been cold and rainy for three days in Ottawa…is this bee behaviour typical ?
@westendstudiotour got lots of rain today - but young natural ink lovers came in their Wellies...but left their ink tests. Was delighted to have some very young art collectors today!
@westendstudiotour Open today!
@westendstudiotour - on sale at the studio tour: many back issues of Embroidery Magazine, Surface Design mag, Fiber Art Now mag and Selvedge mag. Et Al. @outoftheboxfibreartists @cbbag_ov Lots of art mags and books at ONE GREAT PRICE!
@westendstudiotour this weekend: I am reducing my library of art books and art magazines - come and find some to inspire you! And maybe their price will inspire you to take home more than one!
Shades of September sumac: botanical print on wool/silk - a variation of colours and broken forms that this genre of printing allows @westendstudiotour
Comparing oranges to oranges: Osage Orange wood yellow on top and coreopsis tinctoria blooms below. On cheapest Fabriano watercolour paper. @westendstudiotour #makeink
Osage Orange wood ( maclura pomifera) from Maiwa in Vancouver. A pretty respectable yellow that layers to a warmer orangey. But not the magnificent old Tennessee Osage gifted to me by @lizzydoone - I named that one Tennessee Tomcat Orange in Lizzy’s honour. And, btw, that Osage colour is still as the original on Canal paper by Saint Armand of Montreal. Plant provenance makes a huge difference sometimes. @westendstudiotour @papetriesaintarmand @makeink
%d bloggers like this: